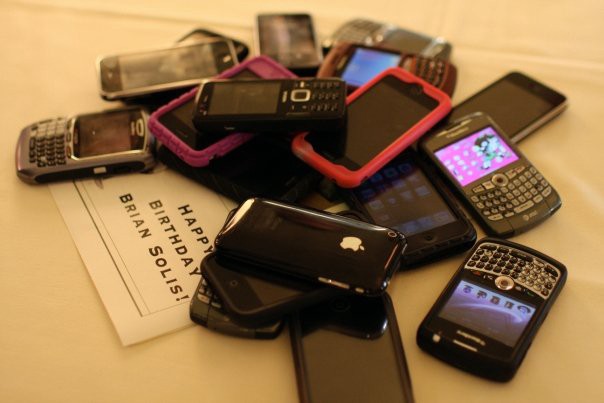 Oh, the irony. Recently on Facebook, I was presented with a memory from nine years earlier. It was a picture from my birthday dinner with a pile of phones strewn across a table. It was almost as if there were a sign that directed people to the table with instructions to leave their phone behind.

It was December 8th, 2010 and we were once again in Paris for the annual gathering of the geeks at LeWeb organized by Loic and Geraldine Le Meur. It was my 40th birthday and since we were all in town, an incredible group of friends gathered at Café de la Paix for what was an unforgettable dinner. Even though we were all friends, everyone was in their own way, an early pioneer in tech, representing the “Silicon Valleys” of their respective countries. As geeks, we were also early tech adopters, which is important to the story. 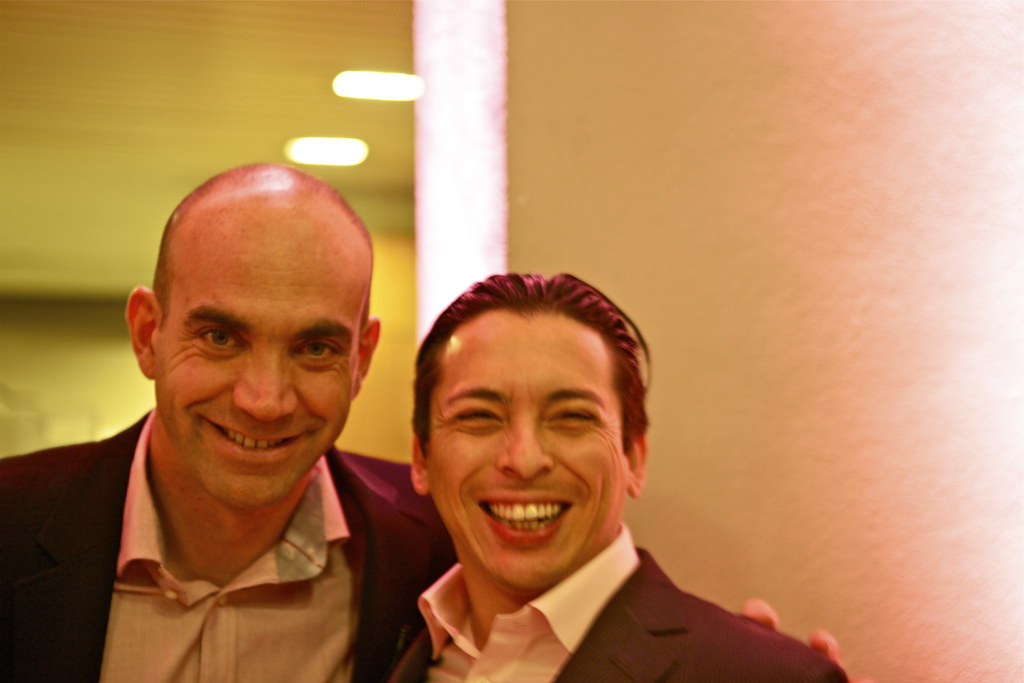 Upon arrival, next to a simple laser-printed sign that read “Happy Birthday Brian,” everyone set down their smartphones and dumb phones (they were still around then!). What started with one device, ultimately served as the de facto coat-check for all phones. At the time, this type of behavior wasn’t the norm. It was only 2010. As early adopters, we were already living a life of duality…online and offline. The smartphone and social media revolution were already gaining momentum and changing the world along the way.

We were blinded with possibility. We were intoxicated with newfound empowerment and the ability to connect in real-time to anyone, anywhere. We were becoming influential thanks to powerful platforms and networks that gave us a voice and democratized information, influence and communities. We were cultivating audiences with audiences of audiences. We were in control of our own network effects. We were exposed to new cultures, world events, intelligence, entertainment, people, and markets that only the elite had access to previously.

We had yet to learn about the negative effects of persuasive design, digital distractions and addiction, and the eventual rewiring of our biology. It was all so new.

Remember, by 2010, mobile and social media were just starting taking over the world. Youtube launched in 2005. Myspace was still alive and well. LinkedIn was already eight years into its evolution. Twitter was founded in 2006. Facebook opened to the public in 2006. The original iPhone debuted in 2007 and by December 2010, we were already buying the iPhone 4. Foursquare founded in 2008. Instagram founded just two months earlier in October 2010. At the same time, there were so many other hot networks in play such as Ning, Tagged, hi5, Meetup, Bebo, Friendster, Multiply, Orkut, among countless others. Social media was everywhere. #ArabSpring was just about to play out on Twitter, Facebook and Youtube in the new year.

Back then, playing with your phone at the table was still considered rude, not a norm. We used to excuse ourselves to go to the bathroom just to check our devices. There were even games where if someone reached for their device, they were then forced to pay the bill, do a dare, take a shot, or something that would punish them. It took years to finally learn that what happens behind that screen was an intentional life hack to change our behaviors, transform us into life broadcasters, hold out attention, become dependent on reactions, hold us captive to the updates of others, and make us dependent on the cycle of it all because for some reason, we lost sight of what’s right versus what’s right now.

It was sublime. We intentionally traded access to our devices and connectivity to savor a moment with others who mattered beyond that moment. We opted out of FOMO to live our best lives right there and then. We felt validation in the company of one another. We felt abundance in all of the things that made that moment a rare event. Gratitude was just a natural byproduct of it all.

As one of the early champions of social media and mobile technologies, it was impossible then to imagine that just nine years later, I would publish Lifescale, a book on the negative effects of digital’s unchecked stronghold on our lives. After all, we were developers, entrepreneurs, investors and believers in an open, more connected and empowering web. We wanted to change the world. And, we did. And, we’re still at it because we were, and still are, hopeless optimists. But, even I wasn’t immune. I would eventually learn how my digital behaviors were affecting my productivity, creativity, memory, happiness, relationships, and ultimately, my self-esteem.

All these years later, that night still holds this lesson for me. In many ways, this picture was a harbinger of things to come. Just a few short years later, our dependency on these devices would change our behaviors so dramatically, that early startup founders, developers, investors and business leaders would eventually sound an alarm for humanity. 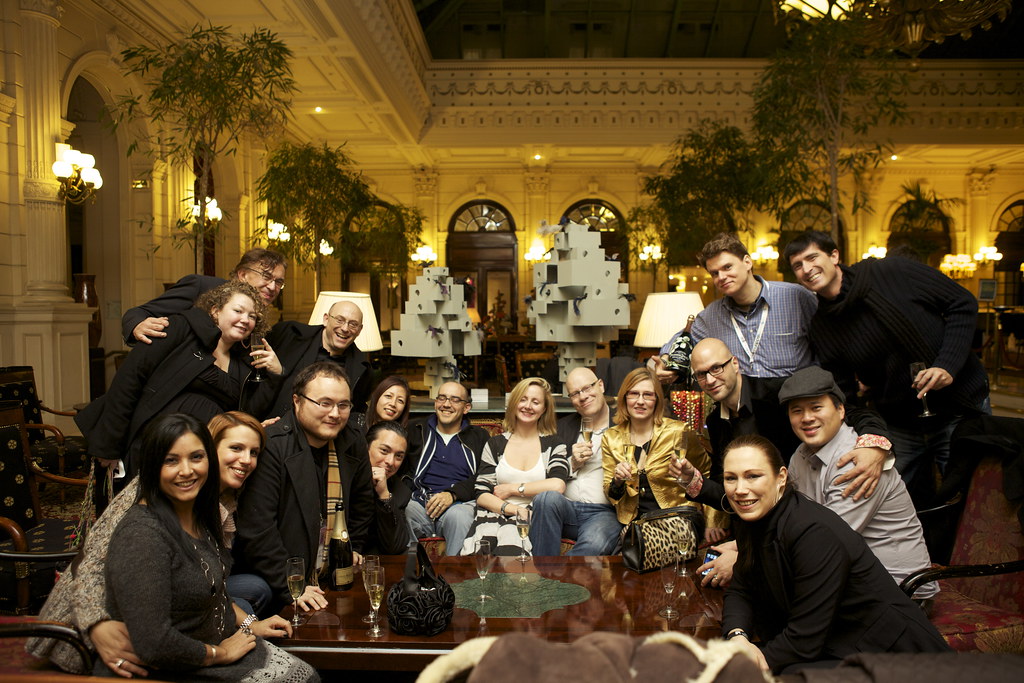 Pictures from the evening are still online here.

Brian Solis is world-renowned digital analyst, anthropologist and futurist. He is also a sought-after keynote speaker and an 8x best-selling author. In his new book, Lifescale: How to live a more creative, productive and happy life, Brian tackles the struggles of living in a world rife with constant digital distractions. His previous books, X: The Experience When Business Meets Design and What’s the Future of Business explore the future of customer and user experience design and modernizing customer engagement in the four moments of truth.

Invite him to speak at your next event or bring him in to your organization to inspire colleagues, executives and boards of directors.

The post The lost art of being present and making important moments matter appeared first on Brian Solis.

This article was published by Brian Solis.

I trust you found the post above of help or interesting. You can find similar content on our main site here: superspunarticle.com/blog
Let me have your feedback below in the comments section.
Let us know which topics we should write about for you in future.

The Future of Marketing – in 2020 and Beyond

How to Make Sure Algorithm Changes Don’t Destroy Your Business

The Secret to Making Paid Advertising Work
Scroll Up